The Nikka Yuko Japanese Garden contracted us to forge custom hori hori tools from reclaimed railroad spikes and discarded hockey sticks to celebrate their 50th anniversary. The first batch has been completed and delivered, and more are coming out of the shop every day. These tools are our take on the long standing pattern design that originated in Japan centuries ago. The blades are water quenched to a hardness of about 50 Rockwell C, which is about equivalent to an axe head. The edges are sharpened, and one is serrated to ease cutting of woodier materials. The overall length is approximately 11″ to 12″, and the blade is roughly 6″ to 7″ of that length, enabling deep digging when necessary. 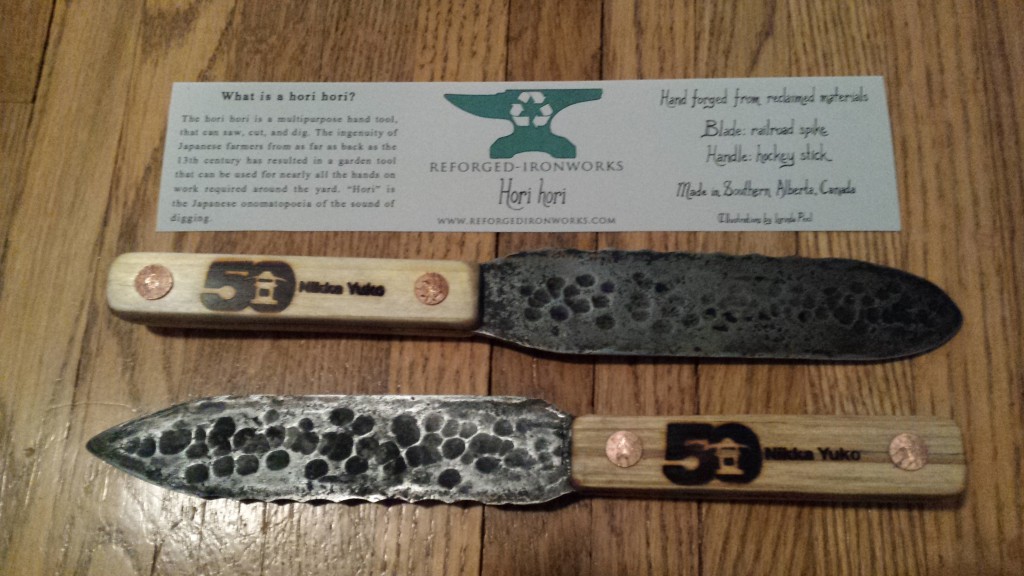 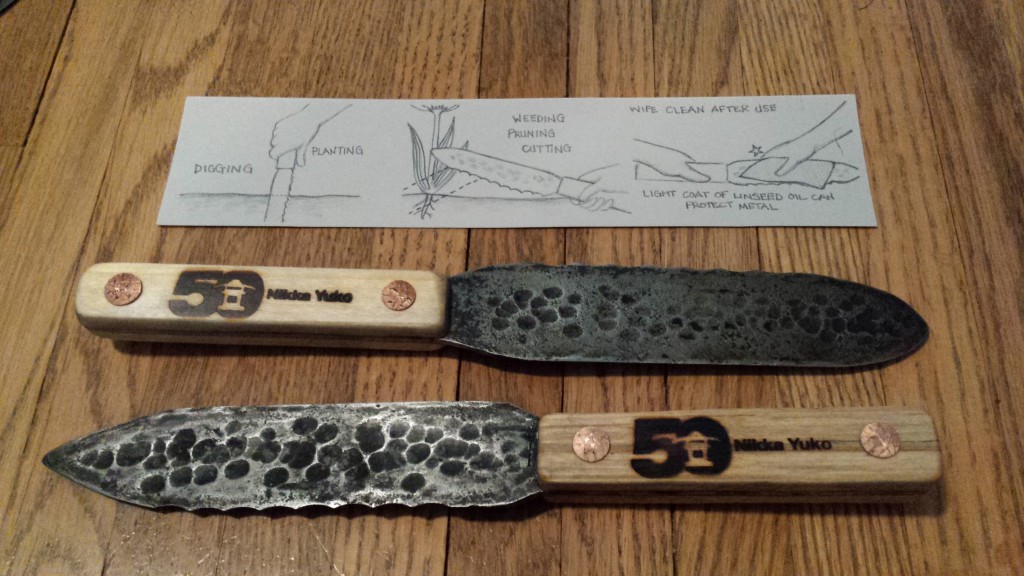 When ordered these tools come with a handsome fold out card that provides simple instructions on usage and care as well as details on the material used, and the origin of the hori hori.

How is it used today?

The hori hori is a multipurpose hand tool, that can saw, cut, and dig. The ingenuity of Japanese farmers from as far as back as the 13th century has resulted in a garden tool that can be used for nearly all the manual work required around the yard.

Where does it come from?

The hori hori (hori is an onomatopoeia of the sound of digging) is a hand tool of Japanese design. It’s believed the design came from the need to harvest wild vegetables from the mountainous regions of the country. The flat shape of the sharpened blade allowed foragers to efficiently harvest by digging deep and slicing through plant roots and tough vegetation.

The Ashigaru, the warrior-farmer, played an important, if unscrupulous, role in Japanese warfare during its middle ages (1536 -1598). Conscripted farmers weren’t paid for their services, rather they were granted the freedom to take any valuables from the dead. There was a rise in the number of professional peasant mercenaries as a result, and feudal lords at the time perceived that as a threat. During Emperor Toyotom Hideyoshi’s rule of Japan, he implemented Katanagari (literally, sword hunt) to confiscate the weapons the ashigaru had collected during war. The hori hori, while technically not a weapon, could double as one in an emergency while also providing many useful functions for the farmer and gardener

How do I order a hori hori?

Use our Contact Page and request your order and we can get to work forging one for you!